With so many taverns and restaurants in Wrigleyville, you may never even get into the Cubs game 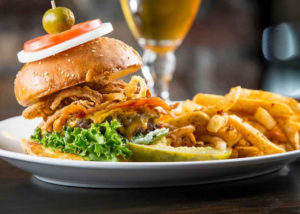 When your ballpark has been in the same highly-populated urban area for over a hundred years, you know there are going to be some game-day traditions. In Chicago’s Wrigleyville, some of those traditions pre-date the name itself, a term coined by a real estate developer some time back in the ’60s.

Stand on Clark Street across from the world-reknowned marquee, and you can’t trip without falling into a local eating/drinking establishment. Here’s a list of some of the more popular venues:

Cubby Bear – Kitty-corner from the Wrigley marquee (or “catty corner, depending where you’re from … ) this is the definitive post-game place to be. A massive sports bar (30,000 sq ft), that simply requires falling out of the ballpark and crossing the street(s), where you’ll be hanging with the same crowd you attended the game with. There’s also live music on many evenings.

Yak-Zies Wrigleyville – A satellite of the original Yak-Zies on Diversey, this welcoming American-style sports bar takes it’s name from the phonetic pronunciation of the traditional Polish greeting Jak Sie Masz (“Hello, how are you!?”)

Casey Morans – Just across the street from the players’ parking lot, Casey’s offers great burgers and other pub fare that can be enjoyed in the main bar or in their “all weather” beer garden, which has a retractable rooftop.

Old Crow Smokehouse – Even in the city of big shoulders, sometimes you still need to get your country on. Some authentic southern-style BBQ, southern cocktails and live country music should fill the bill nicely.

John Barleycorn – The Wrigleyville edition of this Chicagoland mini-chain, you’ll find a full food menu and a real full beer selection in an urban-hip atmosphere.

The GMan Tavern – formerly known as The Gingerman Tavern, this is neither a sports bar, nor necessarily a Cubs Fan hangout. Instead, it’s a decades-old, low-key hangout bar that just happens to be one of the coolest places on earth to have a beer and play some pool or pinball. Well worth walking the extra blocks

So, is everything located along Clark Street … ?

Clark Street is packed both before and after Cubs games, but sometimes you can dodge some of the crowd by heading east on Addison and then north on Sheffield (or just follow any right-field home runs), where you’ll find:

The Dugout Sports Bar and Grill – Possibly the smallest drinking establishment in Wrigleyville, and open since 1954, this basement bar has been drawing baseball fans for beers on tap, hot dogs & Cubs games. That being said, it was recently “rescued” by a popular cable-network TV show, and later converted back to its former dive-self.

Murphy’s Bleachers – Another large-scale sports pub that has everything you’d expect, along with a spacious outdoor area. This is also one of the locations that boasts a famous rooftop seating section with a Wrigley view of Cubs games.

Check out the great travel packages we've created for following your favorite teams from: